A Rose for the Weiner King

At Seventeen Lyrics by Janis Ian
Janis Ian, Performing "At Seventeen", 1976
Posted by Helena Fortissima at 5:40 AM 2 comments:

The Ballad of the Poorly Timed Anesthetic

In my opinion, The Beverly Hillbillies was one of the most cleverly-written sitcoms of all time, and I never get tired of watching that show. I got the tune stuck in my head today, and decided to re-work the ballad. Believe it or not, this took me about 5 hours to write. The Ballad of Jed Clampett was composed and performed by Lester Flatt and Earl Scruggs in 1962, and the last stanza is heard with the closing credits. If, by some chance, you don't recall the tune, I've provided a link to refresh your memory. You may find yourself humming while you work. Enjoy!
The Ballad of Jed Clampett
Your patient’s on the table, loaded up with Versed
He’s breathing through a mask with a BIS on his head
You give lidocaine, then you push some propofol
And crank up the best volatile of them all
Desflurane, it’s insoluble
A nurse asks you “Can we put this catheter in?”
“We'll hurry so the surgeon can begin.”
You intubate the trachea with your Mac 3 blade
Better get that Ancef in before incision is made.
Prophylaxis, keeps them germs away
Surgery commences and your patient’s doing fine
So you flush that rocuronium through your IV line
Now the wound is being closed and you check the train of four
There ain't no freakin' twitches, it’s a state you can’t ignore
I need neostigmine, y'all! And some robinul!
At last...head lift...pull that tube!
Posted by Helena Fortissima at 6:18 PM No comments:

Hurry Up and Wait 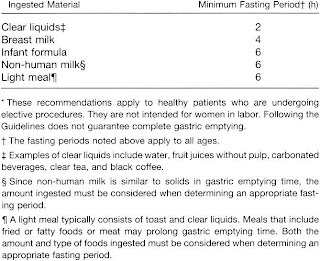 On Christmas Eve, Nick and his girlfriend, Haley, Rory, Brad, and I celebrated our Christmas together. We're a mixed crowd of vegetarians and meat-eaters, so I ordered a mini Honey-Baked ham, and then spent the rest of of the day preparing simple, yet exotic vegan and vegetarian dishes. Our  menu included a salad of roasted kale with toasted coconut chips, dressed with  nama shoyu vinaigrette;  Gruyere-topped mushroom-wild rice casserole; Spanish piquillo peppers, stuffed with a garlicky puree of cannelini beans, kissed with a splash of good sherry vinegar; a warm fingerling potato salad with roasted broccolini and chopped eggs in a red wine-mustard sauce; a gingery, peppery stir-fry of tempeh and cauliflower rice. For dessert, there was vegan sweet potato brazil nut crunch pie, which was out of this world! In all, it was a stunningly colorful, earthy, tasty feast, designed to please all palates. As my husband, Brad, aptly put it, "There's a lot of different flavors going on here!"
Nick works at Return to Eden, a natural foods store in Atlanta. Most of the people who work there are in the under 40 crowd, and seem pretty committed to living a healthy lifestyle through thoughtful nutritional choices, yoga, meditation, etc. I guess you could say there is a likemindedness among Nick and his coworkers. Because he has to stock the freezers sometimes, Nick wears an old Mexican-style hoodie that my sister, Emi, gave him a while back, in order to keep warm. When he showed up to work with that hoodie, his boss laughingly teased him, saying, "Nick, 1994 called and it wants its hoodie back!" There is a stigma associated with certain types of attire, and the Mexican hoodie harkens back to the days of grunge. It was a time before cell phones, PCs, iPods and the Kardashians. It was a time when Generation X was expressing its disenchantment with society through groups like Mudhoney, Nirvana, Alice in Chains, Soundgarden, and Pearl Jam. I remember being excited back then, thinking we were on a verge of a cultural revolution, a time of progressive thinking, a time of enlightenment.
It is now almost 2012, and I have never seen American society as polarized as we are of late. We are still reeling from September 11th, and the xenophobia is palpable, more rampant than ever. We have divided ourselves into the 99% and the 1%. Occupy Wall Street continues in full force, and you're pretty much for or against the movement. If you support OWS, you're either a lazy, entitled, poor excuse for a human being, or you're someone who's fighting for civil and cultural equality and basic human rights, depending on which social order lens you're using. We're at a strange impasse politically, with a cartoonish group of Republicans and Tea Partiers, vying for the 2012 election against Obama, who stands alone. People are cranky and unhappy and becoming increasingly critical of people and groups whose ideas they don't care to understand, and much of the vitriole seems to be fear-based in origin. I think about how my father came to this country in 1956 to live his dream, and wonder exactly what it was like for him as a new immigrant. I sometimes find myself wishing it was still 1994.
Nick told us he recently had a woman customer, who inquired snottily while eyeing his Mexican hoodie, "Do you say 'Merry Christmas' or do you say 'Happy Holidays'?" In his usual low key, respectful manner, he replied "I don't have a problem with 'Merry Christmas', but I don't see anything wrong with 'Happy Holidays', either." For some reason, our society become especially divided about Christmas this year. Most notably, we've endured the white Coca-Cola can debacle, a campaign intended to raise awareness about polar bears, which triggered public outrage, presumably because changing the iconic red Santa can was perceived by some as an attempt to pander to other religious groups, such as Jews and Hindus. Some consumers even reported that the Coke in the white cans "tastes different." Honestly, I don't drink Coke, so it really doesn't matter to me. But, I do believe that society at large is placing too much value on symbols, on things, that are meaningless in and of themselves. The formula for Coca Cola hasn't changed, and isn't it what's on the inside of the can that counts? Who cares if the can is white or red? And for that matter, what does it really matter whether someone wishes you Merry Christmas or Happy Holidays; isn't it the thoughtful gesture of well-wishing that's important? Without going into detail about how the Christian, Jewish, and Islamic faiths borrowed their traditions and stories from the Vedics, there is a reason for the season, and the reason is this: peace on Earth and good will toward humankind. My Christmas wish for our society is that we will spend less time this year fretting about how we're different, and more time reflecting on how we're alike: we are all human, and we are all eternally interconnected through a force none of us really understands. Peace out, man, it's all good!
Posted by Helena Fortissima at 12:29 PM No comments:

A Bitter Pill to Swallow

Last Tango with the Virgin Mary

*first two consonants of last name changed
**original quote borrowed from Euripides
All Things Considered: A Quest to Seek the Sublime in the Spiritual
Euripides: Question Everything. Learn Something. Answer Nothing.

Posted by Helena Fortissima at 3:05 AM 2 comments:

Posted by Helena Fortissima at 2:48 AM 2 comments: