A Prayer for Michael

I've spent the last 24 hours, in deep thought about a friend of mine's husband who had a terrible motorcycle accident yesterday. Michael, who is 42, was struck when a 19 year old woman ran a stop sign in her Honda Civic, colliding with him from the left, ejecting him from his Harley, fracturing his skull, his thoracic and lumbar spine, his left leg and left shoulder blade, his pelvis, and a number of ribs. He was unconscious at the scene. Initially, he was transported to Floyd Medical Center, the hospital where his wife, Kim, and I used to work together, but because of the critical nature of his injuries, he was airlifted to a trauma center in Chattanooga, Tennessee. I am following Kim's updates on Facebook. Last night, she reported that Michael sustained a spinal cord injury, and is paralyzed from the chest down. He was awake, following commands, and moving his arms. His surgery yesterday to stabilize his fractured pelvis and leg had to be interrupted because Michael was too unstable, and he is now undergoing neurosurgery to stabilize his thoracic spinal fracture. Hopefully, with successful surgery today, resolution of the swelling around the spinal cord, and rehabilitation, Michael will regain his previous level of functioning. I can only imagine what Kim is feeling right now. She and Michael have been together for 17 years, and have two sons. Although I don't know Michael personally, based on previous conversations I've had with Kim, I can tell that they are a couple who are still very much in love. Less than a month ago, they were snowboarding on a family vacation in Colorado.
In learning of a tragedy like this, I can't help but wonder about what was happening just moments or hours before the accident. For both Michael and the young driver, I imagine that yesterday probably began just like any other day, with morning rituals and routines, and perhaps, a sense of anticipation. It is doubtful that either of them awoke, thinking, "Something terrible is going to happen today." Separately, they went about the business of getting to wherever it was they needed to go, completely unaware that their paths would later cross in such a fateful way, or how in one brief moment, both of their lives would be inextricably altered.
This accident could have happened to any of us. We don't consciously think about how a single variable being slightly askew or out of place can affect us; otherwise, we'd never set foot outside our homes. We trust that people are going to do the right thing, like stopping at a stop sign. I wonder what distracted the lone young woman driver in this case from stopping. Was she texting or talking on a cell phone? Was the weather so bad that she couldn't see the stop sign? Or, did she not stop on purpose, because she was in a hurry? What was she thinking? Was she thinking? I can't help but wishfully think, "If she had only left her house a few minutes earlier or later, this never would have happened." On a superficial level, especially during a time of grief, this kind of logic seems to make sense. In our human desire to go back in time and somehow prevent the hand of fate from delivering its outcome,  wondering "if only" seems to helps cushion the blow. Regardless of whether or not this situation could have been prevented, it happened. If the young woman was distracted by a cell phone, or for whatever reason, chose to disregard the rules of the road, she was already on a collision course with destiny. If that's the case, a split second of faulty decision-making on her part spun out of control, dominoing into a disaster, profoundly impacting so many lives, not the least of which was her own. It all seems so senseless. If she hadn't run into Michael, would it have been someone else? Why, oh why, do things like this happen? It's almost impossible to comprehend the uncertainty and grief Kim and her family are experiencing. The only thing that seems to make sense right now is to pray.
I am not a praying person per se, but I do believe in a universal consciousness which channels our thoughts, hopes, and dreams. If this universal consciousness is God, then we are all part of it, just as it is part of us, and in that sense, we are all embodiments of God. It's inexplicable, something to which we all contribute, and have equal access to. I've seen the powerful effects of healing thoughts and wishes, all of which could be considered a form of prayer, and perhaps right now, I am praying. My thoughts are with Michael, Kim, and their sons, hoping for the best possible outcome, and maybe even a miracle or two. 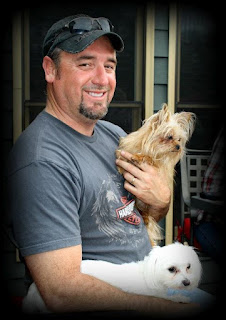 Posted by Helena Fortissima at 8:23 AM