We Snooze, We Lose!

Over the last couple of months that I haven't been working, I've become well-acquainted with the rude sound of Spartacus's cell phone's snooze alarm. It appears to be set to alarm about 45 minutes before he really wants to wake up. Aside from its annoying ring tone, this alarm will sound every 15 minutes, which he usually sleeps right through. Since the phone is on his side of the bed, I have to stir him from his catatonic, hibernation-like slumber to ask him to turn it off. This wouldn't be a problem, except that I'm wide awake after the first alarm. Once we're both up, having our coffee, he'll remark that he feels more tired than he did when we went to bed. I've often wondered, why isn't he waking up, refreshed and recharged after a full night's sleep? We go to bed together between 10 and 10:30 pm, and are up by 0620, which adds up to about 8 hours of sleep. I'm convinced his perpetual tiredness is a function of snoozing. I understand that he likes the idea of having a few more minutes to sleep, but why not just sleep until a) you wake up or b) the alarm goes off? Snoozing gives one the illusion of having more time to sleep, but all it really does is interrupt your natural sleep cycle, and disturb your sleeping partner. What is modern society's fascination with snoozing, anyway?
From the day I started residency, sleep became a precious commodity, something I coveted. As a surgical intern, I sometimes wouldn't get home in the evenings until 8 pm, and would have to be back in the hospital, ready to pre-round with the senior residents and fellows by 0500 or shortly thereafter. (Real rounds with our attending surgeon occurred later in the morning.) This meant getting up around 0330 every day, throwing back a cup of coffee, showering, and hitting the road, so that I could see and examine the patients on our service, and get all my intern notes written for the day. Accordingly, my alarm was set for 0330, and when that alarm went off, I immediately bolted out of bed. I remember only one or two times where I had mistakenly set the alarm for "p.m.", instead of "a.m.", sleeping a few minutes past my normal rising time, making me late. I attribute the rarity in which I was late to the fact that I was usually awake a few minutes before my alarm went off, in much the same way as I still am today. For example, in order for me to get to the hospital by 0615 at my most recent job, I'd arise at about 0515, no alarm necessary on most days. This gave me plenty of time to enjoy my usual two cups of coffee in absolute quiet and solitude, check my e-mail, eat some breakfast, and get ready for work without having to hurry.
What exactly happens during six to eight hours of sleep, which seems to be the universal recommendation in avoiding the much-dreaded (and dangerous) state of neurologic dysfunction called sleep deprivation, which arises from accrual of a sleep debt? Sleep consists of two stages: non-rapid eye movement (NREM) or restorative sleep, and rapid eye movement (REM) sleep, which is where active dreaming occurs. NREM sleep is further divided into three stages: N1, N2, and N3, with N3 being the deepest sleep state. Each sleep cycle lasts about 90 minutes with four to six cycles per night. Deeper sleep tends to occur earlier in the night's cycle, while REM sleep predominates in the latter part. In general, sleep architecture progresses from N1 to N2 to N3 to REM and back to N2. In N1, which lasts about 5 minutes, we are transitioning into sleep, and are easily awakened. In this stage, the brain's wakeful alpha waves are replaced by slower theta waves. The eyes are moving slowly beneath the eyelids, muscle activity begins to slow down, and consciousness starts to wane. It's not uncommon for people to experience "hypnic jerks" or hypnogogic hallucinations (waking dreams) during N1.(1,4,5) The first true stage of sleep is N2. Lasting between 10 and 25 minutes, N2 is where we spend approximately 45-55% of a typical night's sleep. This "light sleep" is characterized by the appearance of sigma waves (sleep spindles) and K-complexes on the EEG, oscillatory bursts of brain activity, often followed by muscle twitching, which are thought to assist the brain in maintaining tranquility, screening out external stimuli, and refreshing our ability to learn. In N2, the heart rate slows, body temperature decreases slightly, and eye movement ceases.(1,4,5) The deepest sleep occurs in N3, accompanied by extremely slow delta waves, and a redirection of blood flow from the brain to the muscles, which is thought to restore energy. If you are awakened during N3, you're likely to feel  somewhat disoriented for a few minutes. People with parasomnias, or sleep disorders, such as nightmares, night terrors, and sleepwalking, as well as those with nocturnal enuresis (bed wetting) experience these problems in N3 sleep.(1,4,5) About 70 to 90 minutes after falling asleep, we enter the REM phase, spending approximately 20-25% of a night's sleep in this cycle. REM is characterized by rapid eye movements and a low voltage EEG. Our arms and legs are "paralyzed." Breathing becomes shallow, heart rate and blood pressure increase, and we experience active, memorable dreaming. Whereas NREM sleep is restorative to our bodies, REM sleep is where our brains and minds are refreshed.(1) This is where we integrate information we've learned over the course of the day into learning and the formation of new memories, strengthen existing memories, and replenish mood-boosting neurotransmitters.(1,4, 5) Below is a sleep architecture diagram(1), which depicts how much time we spend in each of the stages, and how the cycles shorten or lengthen during a typical night of sleep: 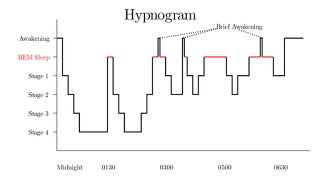 Disruptions in NREM sleep, caused by altered circadian rhythms (night shift work), external stimuli (crying babies, a partner's snoring), or substances like alcohol, tobacco, and caffeine,  rob our bodies of energy and cause us to awaken feeling tired. If these alterations in deep sleep persist over the course of a few days, it can lead to a state of sleep deprivation. What are the signs, symptoms, and ill effects of sleep deprivation? Here is a helpful list, borrowed from an online article entitled How Much Sleep Do You Need?(1)


You may be sleep deprived if you...

The effects of sleep deprivation and chronic lack of sleep...

1. How Much Sleep Do You Need?
2. Sleep Hygiene
3. Snooze Alarm Takes Its Toll on a Nation
4. Coping with Excessive Sleepiness
5. Sleep
Posted by Helena Fortissima at 8:57 AM