When "g" Inadvertently Became a "ɋ"


She couldn't have been more than six years old at the time, given the conspicuous absence of both bottom incisors, her school uniform itchy and tight about her waist as she sat at her desk, folding a piece of paper over and over on itself, marveling at how it kept getting smaller, wondering if folding it enough times would eventually make it disappear. Defiantly shoved beneath her Big Chief tablet, barely obscuring her assignment's tell-tale red star sticker, lay the ruins of a job almost well done. For a left-handed girl who still wrote her name backwards, penciling row after row of lower case "g’s" without besmirching the sheet of paper had proved an impossible challenge, especially given the fact that Sister Mary Nicholas did not permit the use of erasers without prior special dispensation.
Only moments before, she'd set about the task of making “g’s,” concentrating intently, determined that today's effort in penmanship would be rewarded with a gold star, not the usual blue or green one. She glanced over longingly at Perfect-Sharon-Carmichael's desk. The tip of Sharon's tongue was already deliberately affixed to the corner of her mouth in typical studious fashion, marching her “g’s” almost mockingly across the page, each letter as crisp and pristine as the typeset in their "Fun with Phonics" workbooks. Pretty, bright, and obedient--the sugar and spice embodiment of a teacher's pet--Sharon was her unsuspecting nemesis. From her stylishly coiffed glossy brown hair to her meticulously polished saddle shoes, Sharon had all the right stuff, including right-handedness. Unfazed by the dreaded yellow subtraction flash cards, Sharon would enthusiastically raise her right hand, righteously illuminating the rest of the class with all the right-minded answers. It just didn't make sense that she was the one who got to use an eraser.
Two rows of “g’s” down, three more to go. She'd been careful to elevate the sooty pinky-side of her hooked left hand ever so slightly to keep it from dragging and smudging the paper, taking her time to scribe what was certain to be the most exquisite array of “g’s” Sister Mary Nicholas had ever seen. Distracted by the sudden violent scrubbing of Sharon's coveted eraser, her next “g” inadvertently became a "ɋ." Just as she was completing the "o" part of a particularly troublesome “g,” her adversary's convulsive fit of erasure trembled her desktop, peppering it with pink shrapnel, the detritus of which she was tempted to scavenge and roll surreptitiously into a tiny eraser of her own, a delightfully naughty fantasy indeed. Captivated by this wildly provocative thought, she carelessly transposed the "j" which was supposed to turn her "o" into a “g.” Now, she was stuck with “ɋ.”
Deprived of eraser privileges, and impoverished by her own awkward chirality, she deftly resorted to other means of correcting her sinister slipup. Surely Sister Mary Nicholas, who was thickly bespectacled and had eyes in the back of her drab grey veil, wouldn't notice the little bit of saliva she'd used to coax the “ɋ” into an "α" and finally, into a magnificent “g,” as flawless and unadulterated as one of Sharon's scuff-free shoes... 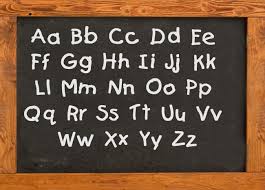 
Posted by Helena Fortissima at 11:56 AM

Email ThisBlogThis!Share to TwitterShare to FacebookShare to Pinterest
Labels: being left-handed, childhood memories, comparing oneself to others, elementary school, learning, learning to write, making mistakes