It's Saturday morning, and I'm sitting here perusing our neighborhood doughnut shop's morning offerings on Facebook, hoping that Spartacus, who's just woken up, will fetch us a half dozen of Revolution's pillowy good Carrot Cake and chocolate-glazed, nut-crusted, coconut-custard-filled Almond Joy to savor over our long holiday weekend. Seeing as how I'm in a writing slump, I really have nothing better to do at the moment.


This is going to sound crazy, but after finishing my last short story (Sun Jelly Pastures), I went through a strange sort of grieving process. Personally, I thought it was a pretty fantastically original story. For five weeks or so, I poured myself into creating characters, moods, imagery, feelings, and environments that were so meaningful and real to me, it was like having some sort of mystic experience. I became very close to a fellow blogger, Madilyn, who graciously assisted me in my research of Navajo culture. When it was all over, I felt bereft. Although I don't like to admit it, I've actually wondered if I'll ever be able to write anything that good again; that's how much I loved my story. I have no idea whether other writers can identify with such a feeling, but there it is.

Just for the hell of it, I've submitted Sun Jelly Pastures, as well as the first short story I wrote (The Appointment) to several different national fiction-writing competitions. I figure it can't hurt. I'm fully aware of just how competitive the writing market is, so I don't have much in the way of expectations. Maybe someone will like my stories and my style. Who knows? You never know until you try, right?


When my biological clock went off at age 26, I became someones' mom (no, "someones'" isn't a typo; I have twins). At 34, newly remarried with two young children, I started medical school. If I'd spent my life considering whether or not the odds were stacked against me, whether my children were "affordable" or if medical school was actually "doable" for someone as old as I was, I probably wouldn't be a mom or a physician right now. Playing it by ear is how I live life in general. Dr. Frank N Furter's advice in the closing scenes of The Rocky Horror Picture Show has always resonated with me: "Don't dream it, be it." I've never wanted to miss out on life because I was busy making other plans. It hasn't always been easy. Sometimes, it's gotten downright ugly. But, seriously, there's no better feeling in the world than to declare as triumphantly as Edith Piaf, "Non, je ne regrette rien." I couldn't imagine living my life any other way.

I have absolutely no idea what I want to do with my writing. I guess my question is, do I have to do anything with it, other than what I'm already doing? I hate the idea of having to do anything. That's why I'm determined to make working part-time work for me. I like having the freedom to work as much or as little as I want, to be the one in charge of how I spend my time. The thought of being under somebody's thumb is objectionable to me. I really can't help it. I'm an unapologetic free spirit who has little regard for social conventions. I'm a writer because I write. I enjoy what I write, and I think that's probably good enough. 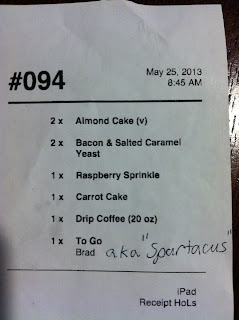 Spartacus just came home from Revolution, and sadly, there were no Almond Nut Joys in the signature brown cardboard box. However, he did bring home a not-too-shabby assortment of Carrot Cake, Raspberry Sprinkle, Almond Cake, and Bacon & Salted Caramel. Somehow, I knew today's odds didn't favor the Almond Nut Joys, but, then again, getting the fancy-flavored doughnut you want exactly when you want it is a rainbow-sprinkled crapshoot, just like life. There are sooooo many uncontrolled variables, such as the availability of certain key ingredients. Or, like what happened last weekend, when Revolution's Hobart mixer broke down, and they had to mix and knead all of their doughnuts by hand. It's still worth taking that better-luck-next-time chance. Anyhow, Spartacus and I armed ourselves with mugs of coffee and munched on a couple of Almond Cakes before he went out to hit golf balls, leaving me all sugared up, but still bereft with nothing to write about. Woe is me; time for a Salted Caramel...


It's an unseasonably cool and windy late spring day here in Atlanta, and in just a few moments, I'll be taking my dogs, Simon and Lilly, out into the front yard to enjoy the sunshine and squirrels. We have absolutely no plans whatsoever for the weekend, and that's exactly how I like it. Ah, the simple pleasures of a life unscripted. Like the mystery assortments Spartacus brings home from the doughnut shop, every moment's a sweet surprise.


For those of you who didn't "get" the Cheech & Chong reference, here's "Earache My Eye."

Posted by Helena Fortissima at 8:55 AM