Part IV of Opportune By Design 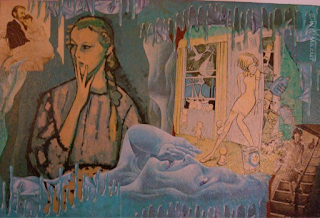 Shortly after Jackie was released from Thurgood's employ for having irretrievably desecrated both the kosher peanut butter machine and the employee restroom, Otto was busted for tax evasion. Regretfully, he'd always paid Big Wendy under the table, so her name wasn't actually anywhere on his books. Oops. So much for mea culpa, tua culpa. Seeing as how Otto'd be chillaxing in Club Fed for at least the next three years, she went ahead and got herself new job keeping the books for Dr. Suck-chin Dongbang, a Korean urologist.


Dr. Dongbang seemed nice enough for a Buddhist, although Big Wendy suspected he'd barbecue his own dog in a New York minute. Several months after she started working for him, Candace, his switch-hitting surgical technician, walked off the job during a particularly arduous penile enhancement, quite literally leaving Dr. Dongbang holding his own dick as well as the ginormous one he'd just fashioned of silicone.

Violet nearly lost her shit when she found out Jackie was living on the dole. Almost. Thanks to those daily milk and molasses enemas she was so partial to, her rectum was about as empty as her soul. In Violet's mind, the only thing worse in life than pecans or small children was a homeless slacker. It was with great reluctance that she allowed Jackie to move back home, especially since she'd converted his bedroom into a cash-in-advance colon hydrotherapy studio where she gleefully irrigated toxic poop shoots on her days off. Considering Birmingham's recent influx of yuppie granolasexuals, all of whom had irritable bowels, she could hardly keep up with the demand.

Jackie's plans for his immediate future involved planting his flatulent ass in front of the TV. Needless to say, Violet wasn't about to have him jizzing all over her good furniture, molesting her CPR* manikins, and scaring her intestinally-challenged customers away, so she started bringing Couch Potato to work with her. She'd quit traveling a while back and was now working as an operating room scrub nurse.

Operating rooms are notorious for attracting personality disorders from across all healthcare disciplines, and Violet was certainly no exception. Just as Hillary's special kind of mayhem was uniquely indigenous to her, so was the barely contained chaos within Violet's OR.** It was like the wild west pretending to be civilized.

Instead of outlaws and gunslingers, there were surgeons throwing tantrums and hurling instruments, arguing with each other over whose case was more urgent while yelling at the anesthesiologist on call for keeping their patients alive, scrub nurses terrorizing medical students who'd violated the sterile field, sleep-deprived surgical interns who looked disinterested, comatose residents holding retractors, hungover techs closing incisions, scalpels that were never quite sharp enough, scissors that couldn't cut paper, circulators incessantly badmouthing the recovery room staff, endless elective add ons, perpetually faulty equipment, and excruciatingly slow turnovers. The only thing everyone agreed on was that when something went wrong, it was probably anesthesia's fault.

Well, lo and behold, the moment Jackie first lumbered into the OR, his shit came together. Colpo di fulmine, as Tony the Italian OR pharmacist would say. Lightning struck, and it was love at first sight. So many interesting bodily fluids and toys, not to mention the partially concealed nudity and rotating parade of foxy anesthesia nurses.

Posted by Helena Fortissima at 5:16 PM