Part III of Opportune By Design 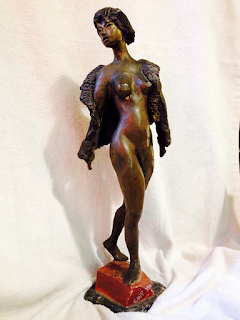 Being a Priester and all, albeit a distantly related one, Violet's disdain for pecans was viewed by her odious spawn as an egregious aberration. Why, Jackie had nothing but mad love for nuts of all kinds, particularly the pair corralled within his feculent plum-smugglers, suspended beneath the ever-tumescent pork sword he polished habitually. He really elevated the art of holding the sausage hostage to a whole new level.

Unfortunately, the kosher peanut butter grinder at Thurgood Peebles' natural grocery was as attractive to a then-pubescent Jackie Priester as it was for Birmingham's orthodox Jew crowd, so much so that he went and got himself a job there. Grinding and extrusion were amongst his favorite things and warm peanut butter sure did make for some sweet lube. Now spooging was finger-lickin' good. Given that Jackie's only real parental figure had been Smelly Mrs. Kelly, Thurgood quickly became his hero.

Thurgood wasn't a Jew, but according to Miss Dolly Sasser over at The Primitive Sovereign Free Will Fellowship of Evangelical Righteous Redemption, he'd been living in sin with that Jewess harlot, Sharon Nussbaum, since sometime in the late 70s. "Fornicators," she'd mutter under her breath while perusing the aisles inside Thurgood's. But Thurgood Peebles' Wicked Den of Transgression was the only store in town that stocked Exquisite Exit, her favorite laxative, so although by shopping there she was knowingly violating 1 Corinthians 5:9 in which the Apostle Paul had made it abundantly clear that she should not be consorting with sexually immoral people, Miss Dolly was able to rationalize that the suffering she'd experience from unmitigated constipation did indeed necessitate her patronage, thereby making her a martyr instead of a sinner. Absolved by her own generous self-sacrifice and occasional bouts of molten diarrhea, she trusted Christ would abide.

Sharon's parents were peanut farmers in Sumter County, Georgia. Upon learning of the growing demand for kosher-certified peanuts in the South after the passage of the Civil Rights Act, they'd emigrated from a kibbutz in Israel and bought a farm near Plains. Sharon and Thurgood met while working the concession stand at the Pleasant Valley nudist colony close to Dawsonville. Except for the hairy mole on her right tit and his uncircumcised schlong, they were both perfect 10s. Oh, and Thurgood also happened to be black, which greatly upset Sharon's parents at first, but once he agreed to ritual circumcision, they seemed OK with him banging their daughter. They even helped finance his grocery store and supplied the kosher peanuts when he and Sharon decided to move to Birmingham.

Raw peanuts in the shell don't require special certification, but shelled ones do. Depending on what type of Jew you happened to be, you might or might not be allowed to partake of peanuts or peanut butter at Passover. Thurgood was sure of one thing, though: most orthodox Jews in Birmingham did consume peanuts and peanut butter at some point during the year. So, the peanut butter machine was kind of a big deal because back then, there was no such thing as freshly ground kosher peanut butter and furthermore, kids in those days didn't have allergies to peanuts, gluten, eggs, yeast, dairy, tap water, refined sugar, food dyes, air, and high fructose corn syrup like they do now.

Jackie's main task was to keep that machine lubricated, an easy undertaking for even the most dimwitted of greaseball wankers. The small quantities of peanut butter yielded during the lubrication process ensured a never-ending supply of piece grease which emboldened Jackie to baste the ham even while he was on the clock. One afternoon, Thurgood summoned Jackie, who was busy beating off in the bathroom, to execute a new task. "Boy, I need you to fill up this here hopper with some a them special peanuts that's been sanctified by Rabbi Feldman, " he instructed. "They's marked 'U' with a li'l circle 'round it." In his self-coitus interruptus daze, Jackie mistook a rat turd for the symbol Thurgood had specified, hypnotized by the rhythmic crinkling of the bag as an avalanche of iniquitous peanuts tumbled into the hopper.