When In Doubt, Cut It Out

Part V of Opportune By Design 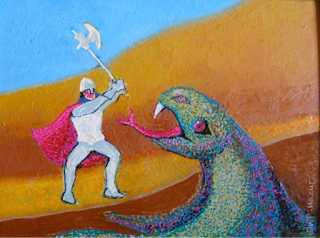 Jackie did such a bang up job assisting Dr. Dongbang, he could practically perform the procedures himself. During his training, he developed a man crush on Dr. William Stewart Halsted, the aristocratic 19th century surgeon who pioneered the principles of modern surgical technique while jacked up on cocaine and morphine. Jackie's mantra quickly became "When in doubt, cut it out."

If only Jackie could amputate his failure to impress Thurgood along with that aggravating crinkling in his left ear. He'd become convinced those satanic peanuts were conspiring to haunt him, orchestrating his demise as they deliberately cascaded across the crinkly cellophane, one by one, straight into the hopper of that wretched kosher peanut butter machine. Dr. Dongbang assured him it was only earwax.

When Dr. Dongbang was offered a prestigious medical directorship for a 49 bed hospital in Macon County, Georgia, he took Jackie with him. As for Big Wendy, she stayed behind in Birmingham where she and Miss Dolly (of all people) founded Eve's Ammo, a successful home party business that outfitted Christ's defenseless female apostles with personal alarms, stun guns, survival knives, and pepper spray.

But Hillary's heart really wasn't in whoring. The only child of an apocalypse-obsessed womanizing preacher, she'd cut her teeth on fire and brimstone. While Daddy busied himself spreading his seed and The Good News, Mama stayed holed up in the bed with her jug of jungle juice and a permanent migraine.

Hillary was a lonely, well-behaved child who always did well in school. To her despair, she developed much earlier than the other girls, giving her an instant slut reputation she'd done nothing to deserve.

More than anything, Hillary loved animals. Her dream of becoming a veterinarian was dashed when Daddy's congregation sued him for conspiracy, extortion, fraud, and money laundering, leaving her family destitute. Daddy was incarcerated, Mama was involuntarily committed, and Hillary ended up quitting high school and giving head at Junior's. From Hillary's perspective, it was a good thing Jackie's mad stacks were even more generous than his loathsome spooge. Were it not for that, she'd have left Montezuma a long time ago.

The crinkling in Jackie's ear was increasingly accompanied by the droning, thought-like voices of Thurgood and Dr. Halsted, which at first were low in volume and critical in nature but quickly escalated into threatening commands.  Clearly disturbed, Jackie grew more and more reclusive, at times failing to report to work. It wasn't long before he stopped coming to work altogether. He just sort of disappeared.

Fly fishermen occasionally reported catching glimpses of a strange man wandering the banks of the Flint. These sightings always attracted a lot of attention because earlier that spring, a turkey hunter and his son discovered the decapitated corpse of a young local woman lying in a shallow grave down by the river.

Several months passed. One evening, as the midsummer sun was starting to set, Jackie stumbled into Junior's. He was wearing nothing but a scrub top and a pair of Crocs, mumbling incoherently--something about a unicorn--and dribbling a steady rivulet of blood as he retreated in zombie-like fashion to the men's crapper.


Posted by Helena Fortissima at 4:19 AM