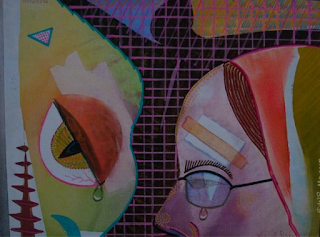 As usual, Pete was parked by the bar, sipping on his fancy imported mineral water. He was the first to witness Jackie's bizarro entrance. Springing from his stool to investigate, slipping and sliding in Jackie's bloody trail, Pete raced toward the now-occupied can. The door wasn't locked, but something or someone was blocking it.

Pressing his ear against the door, he could hear Jackie muttering and clanging around with water running in the background. The clamor was quickly followed by a blood-curdling scream and a sickening thud. Then there was silence. After a couple of minutes of yelling and beating on the door so hard that he bloodied his own fist, Pete started using his body as a battering ram, finally managing to budge it open just enough to peek through with one eye.

What Pete saw inside that shitter could never be unseen. There lay Jackie, collapsed in a pool of bright red blood which was already seeping out beneath the door, his head apparently having struck the toilet. Pete shouted at the bartender to call 911, ramming the door frantically until he was able to squeeze inside. The full horror of the remaining scene instantly made him retch. In a macabre display of ascetic self-mutilation, a rapidly exsanguinating Jackie still clutched a scalpel in one hand and his own meticulously excised testicles in the other. Evidently, he'd attempted to exorcise his own demons.

Once the paramedics arrived, Pete made his way through the resultant commotion to see if he could find Hillary. He was sure she'd want to know about Jackie. But Hillary was nowhere to be seen. She'd been sitting at the bar about an hour earlier, drinking heavily and chatting up a quiet shifty-eyed stranger.

Pete remembered seeing a strange van at load in, a big white one with tinted windows, out of state plates, and a conspicuously absent Confederate flag bumper sticker. It stood out like a sore thumb amongst all the muscle cars and Ford F-150s. Back in the springtime, he'd joined the search party when that poor girl, the one who'd gotten her head lopped off, went missing. Although there'd been reports of a similar white van in that area, her killer was never apprehended. Quickly putting two and two together, Pete bolted toward the parking lot.

Outside, the air was thick and dusk was closing in. In the waning twilight, Pete spotted the van backing out of its space. A sudden flash caught his eye. Lying in the gravel by the van's passenger door was one of Hillary's signature silver stilettos. Pete lunged reflexively, grabbing onto the door's handle with both hands, breaking off the side view mirror in the process.

Without warning, two police cruisers whipped into the parking lot, blocking the van's exit. Two cops jumped out and ran right past the van. They were there to restore order inside Junior's, and since they'd assumed whatever was transpiring over at that van probably involved liquor and a skanky bimbo, they didn't concern themselves with it.

Meanwhile, Pete smashed open the passenger window using the severed mirror. Inside, Hillary was slumped in her seat, looking as if she'd been drugged. In a fit of panicky rage, Pete hoisted himself up into the van through the shattered window, and went straight for the driver's throat. The van surged and halted, then surged again violently over a parking stop.

Pete's immediate instinct was to get Hillary and himself out of the van as quickly as possible. Temporarily stunning the driver with an amateur choke hold, he unlatched the door, kicked it open, and pulled Hillary out to safety. He squared her away, then charged back toward the van. The driver, who appeared mildly dazed but still cocky, gunned the engine and took off.

According to police, in a neighboring town that same night, a man driving a white van was found dead, the apparent victim of the elusive predatory tweaker, known as Waffles, whose calling card was a Dirty Cupcake. The man had seemingly lured Waffles into his van with a bottle of Robitussin and a bucket of Colonel Sanders. Surprisingly astute for a robotripping meth whore, Waffles suspected malfeasance the moment she spied the unsavory assortment of paraphernalia stashed in the back of his van.

In a single stroke, the Flint River Butcher went from pushing fudge to pushing up daisies. The million volt jolt he received was just enough to rupture an occult aneurysm buried deep inside his brain. The shock killed him instantly.

After making sure he was dead, Waffles calmly plucked a small turd from her rectal vault, pressed it firmly into his bellybutton, and decorated it with fried chicken sprinkles from the bottom of the KFC bucket. She then replaced the cap on the Eve's Ammo Super Deluxe Dildo/Stun Gun combo she'd received as a welcome gift at the women's shelter. Click. Big Wendy and Miss Dolly took their call to Christian service very seriously. This innovative new line of double duty defense devices, dispensed free of charge to all whores of Babylon, was their contribution to women's advocacy.

Despite EMS's attempts at resuscitation, Jackie was pronounced dead on the scene due to his self-inflicted wounds. Right before he died, he'd had a brief lucid interval during which he repeatedly murmured the word "eunuch." Unicorn, eunuch. Hmmmm. Given Jackie's nature, and the nature of his injury, he probably got what he deserved.

Hillary skipped town after her brush with death. Every once in a blue moon, she'll send a postcard to Junior's with a California postmark and no return address. The cards themselves are different each time but her one word message, inscribed in girly script with pink ink, is always the same: "Saved." The last card to arrive included her last name, Rutledge. Pete had no idea what Hillary Rutledge was doing with herself, but he understood her message. Wherever she was, he hoped she was happy and that her new life was as opportune and easy as she'd always been.

Perhaps Jackie's auto-castration was his singular act of contrition, his peanut-induced psychosis a metaphor for a penance gone terribly wrong. When you connect all the dots, Jackie's sacrifice was Hillary's salvation. Hillary and Pete were dark horse heroes, fearless and genuine, their flaws redemptive. Hell, even Big Wendy and Miss Dolly got in on that action, a tad self-righteous maybe, but righteous champions of the unclean nonetheless. Vice may be the spice of life but maybe life's the real vice. It takes a good heart to triumph over moral decay, but an even better one to live like there's no tomorrow. The down-trodden, the exploited, the so-called immoral: they're full of stories like that. And this was one of them.

Original artwork by WP Mazur, MD
Posted by Helena Fortissima at 5:16 AM